There is no denying that the dog is man’s best friend. Dogs and humans have been pals since the dawn of time, so it makes sense that dogs would star next to humans in movies too. Film is about life, and, for some of us, life is about dogs. Hence, since the beginning of cinema, dogs have been staring on the silver screen. They make us laugh, break our hearts, and help us fall in love. Whether our cinema dog pals are played by trained canine actors, or drawn by the hand of a dog lover, there are some tails we can’t forget. Here is a list of the top ten most loyal and lovable dogs from cinema history.

Talk about personality. He’s cute, he’s goofy, and he’s just a little bit… off. For a stray, Dante is extremely loyal to the boy who loves him. In fact, his loyalty is his strongest attribute. I mean, this dog followed his human into the afterlife. You really can’t get more loyal than that. In the great beyond, Dante made sure that his boy, Miguel, was safe from danger, even if Miguel didn’t always know that’s what he was doing.

As legend has it, The Beast once ate human flesh and became a great monster of a dog, one that must be tied up forever to keep the town safe. He was the terror of the sandlot, the keeper of the junkyard, the hoarder of… baseballs? When leader of the sandlot gang, Benny, faces off with The Beast, he realizes that the legendary dog is just a lovable mastiff who collects all the baseballs thrown over the fence. After the kids realized how lovable Hercules really is, they wasted no time making him a part of their team.

One of the first dogs to star in a movie was Mut who played Scraps in one of Charlie Chaplin’s films about The Little Tramp. When the Tramp saves Scraps from a pack of bullying dogs, the pair become quick friends. To pay the Tramp back for saving her life, Scraps digs up a stolen wallet and brings it to the Tramp. The Tramp then uses the money from the wallet to buy and house and win over his bride. They all live happily ever after, but it couldn’t have been done without the help of Scraps.

In this Walt Disney classic, Tramp, a street-smart stray with a cocky attitude and a secret yearning to be part of a family, wins the heart of Lady, a well-mannered, house-trained, and more than slightly naive pup. As Tramp takes Lady on the adventure of her life (splitting spaghetti, chasing chickens, and evading the dogcatcher) he realizes that he is ready to leave the life of a tramp behind and settle down for good. Tramp is a lovable and loyal bad boy who has been winning over hearts for generations. 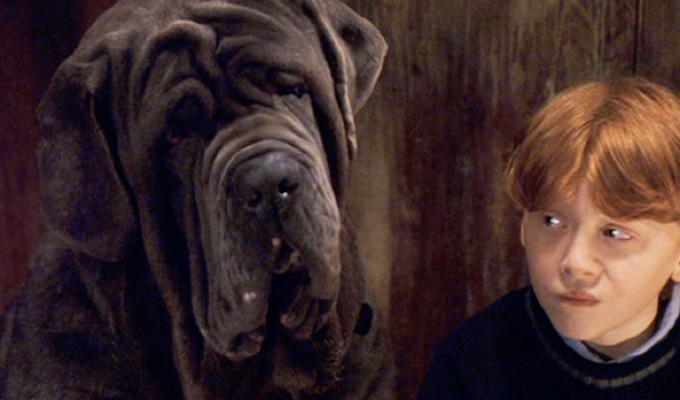 Fang is an oversized boarhound. But, despite his size, Fang is a “bloody coward.” Fang belongs to Rubeus Hagrid, keeper of keys and grounds at Hogwarts. He is introduced in the first film of the Harry Potter franchise and stays until the end. Fang is fiercely protective of Hagrid, but would greet anyone who entered Hagrid’s hut with booming barks and obsessive licking either of their face or ears. There is nothing Fang loves more than to lay his head down on a human’s lap and slobber all over their robes.

A film about friendship and growing up, The Adventures of Milo and Otis featured a curious cat and a loyal pup who went on the experience of a lifetime. When Milo gets trapped in a box and floats down the river, Otis wastes no time taking action to rescue his friend. As Milo continues on his adventure downstream, Otis faces his own adventure- ever slightly behind his friend. By the end of the movie both the little pug and the kitten have grown up and found their partners. Yet, despite having grown up they remain friends as they bring their new families back to their childhood farm. 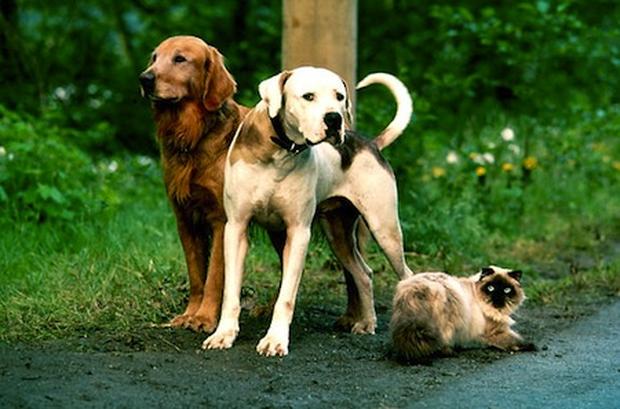 Shadow, a wise and old golden retriever is resoundingly loyal to his boy, Peter. When Peter’s father must temporarily relocate for work, the family leaves Shadow and their other pets (Sassy, a himalayan cat, and Chance, a young bulldog) on a neighbor’s farm. Thinking that they have been abandoned, Shadow becomes instantly worried because he knows Peter would never abandon him. Determined to save his boy from whatever harm he is in, Shadow leaves the ranch in search of his family and Sassy and Chance follow. On their journey to find their family, the pets face a series of misadventures and Shadow must use his wits to save the day. Shadow is respected by Chance and Sassy and the old dog is like a father to them. Despite being old, Shadow is still spry and cunning and full of love for his family.

Although Dug is fully grown, he is still a puppy in his nature. Dug can speak via a special collar made by his former master. However, after he meets Carl, Dug begins to think of Carl as his new master and helps to save his life. Dug is lovable, fun-loving, ever-so-polite, and loyal to his new master, Carl. It’s no joke that Up is one of those films that can bring us to tears several times throughout its timeline. One of those tear-jerking moments is when Dug appears on Carl’s porch and shows his unconditional love to his master, despite Carl recently behaving like a grumpy old man and banishing Dug from his home. Full of loyalty and love, the only thing that can distract Dug is if there’s a — SQUIRREL!

One of the most loved dogs of all time, this stray pup starred in more than 9 movies beginning with Benji in 1974. In this film, a scrappy little stray lives in an abandoned house on the outskirts of a small town. He spends his days wandering the streets of the town and barking hello to his many friends. But, despite his busy days, Benji wants a family. He has his eyes on the Chapman kids, but their father would never allow them to keep a stray. The only thing that could change his mind? If Benji saves the day. And he does so heroically. This little mut conquers all despite his size and the misunderstandings of the people who surround him.

The film that was a true testament to a dog’s love for her human, Lassie is the ultimate loyal dog. When Joe’s parents are forced to sell Lassie to the Duke of Rudling, both Joe and Lassie are heart broken. It seems impossible that the pair will ever reunite when Lassie is taken away to Scotland. However, against all odds, Lassie escapes from the Duke and returns to the boy she loves. Lassie Come Home is the ultimate tale of love conquers all.