Teen comedies and coming of age stories have been popular since the 1980s. Films like Porky’s (1981) and Fast Times At Ridgemont High (1982) led to films like American Pie (1999), Superbad (2007), and Easy A (2010). After Bridesmaids came out in 2011, films that showed that chick flicks could be just as raunchy and gross as guy comedies became popular. In the past 37 years or so, comedies like these films have been paving the way for Blockers the teen sex comedy that has it all: sex, drugs, overly-protective-but-loving parents, a coming-of-age storyline, and a whole lot of comedy.

The story focuses on two groups of friends: three teenage girls who have been best friends since the 1st day of kindergarten—there’s Julie (Kathryn Newton), Kayla (Geraldine Viswanathan) and Sam (Gideon Adlon)—and their overprotective parents whose friendship has become a little rockier over the years. Leslie Mann plays Julie’s mother, Lisa, a single mom that is just not ready to let her only daughter go off to college. John Cena plays Kayla’s dad, Mitchell, a guy that thinks his 17-year-old daughter is still the same little girl she was on the first day of kindergarten. After the girls have left for prom night, the parents discover that their daughters have made a sex pact to lose their virginity after prom. Mitchell, not ready for his daughter to grow up, and Lisa, not wanting her daughter to make the same mistakes she did, vow to block their daughters from completing their pact. Hunter, Sam’s absent father played by Ike Barinholtz, only wants his daughter to have a magical prom night uninterrupted by her friends’ crazy parents, so he follows the other two around in an effort to get them to abandon their cock-blocking scheme. 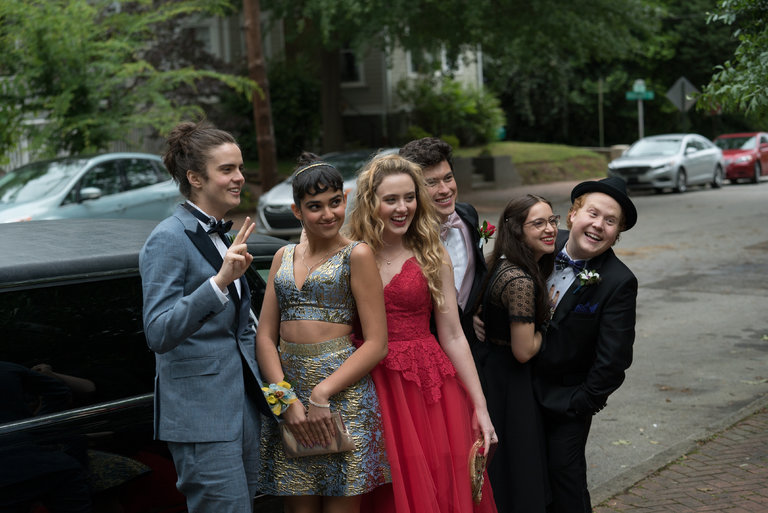 In this funny and relatable comedy, there is never a dull moment. The subject of the film may seem controversial to some, but the film discusses both sides of the sex talk. Is it unfeminist to stop your teenage daughter from having sex? Is it bad parenting if you just let it happen? While it is clear that the writers of the film, Brian Kehoe and Jim Kehoe, and director, Kim Cannon, who makes her directorial debut with Blockers after writing the script for Pitch Perfect, take the more modern and more feminist viewpoint, they do explore the avenues on both sides of the argument.

“While first and foremost a comedy, Blockers is also a film about growing up, and how the parents are affected in the process.”

Because the film looks at sex from both the parental viewpoint and through the lens of a female teenager, Blockers discuses more than just how to handle your child wanting to have sex. It shows how making the decision to have sex as a young woman is often not an easy one. Do you have to wait until you’re in love? Can you bone any guy you meet, like, say, your chemistry lab partner? What if you think you might be gay? How do you find out for sure? And the big one, how do you know that you are really ready? All of these are important questions that may not have easy answers.

While first and foremost a comedy, Blockers is also a film about growing up, and how the parents are affected in the process. While it is nice to see the storyline from both sides of the spectrum, trying to follow six characters in a film that is less than two hours long has its challenges. The development of the daughters is minimal while the growth of the parents is mixed. I was very satisfied with the direction taken with Julie and Lisa, however, the final altercation with Kayla and Mitchell was unrealistic and disappointing.

In a film that will make you never stop laughing, Blockers is ambitious in its comedy. In an attempt to break the mold, Blockers goes for it all. From dumb dad jokes and family comedy to gross-out humor and absurd sex jokes, Blockers will not stay behind one comedy label. And, for the most part, it works. From start to finish, the audience is roaring with laughter.

Overall, Blockers was a funny film with comedy that appeals to a variety of demographics. While the story did have its downfalls, it was still an enjoyable film to watch. I would not be surprised if Blockers goes down in cinema history as another addition to great teen comedies like Easy A and Superbad.